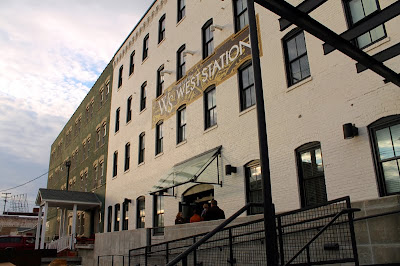 Exterior of the old warehouse on Salem Ave. is now WestPlace. 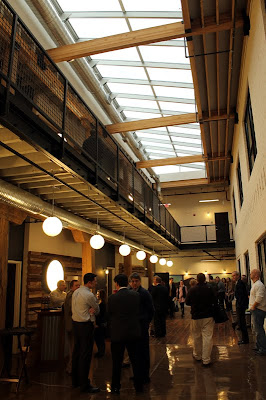 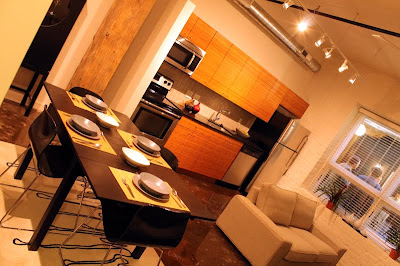 Living room/dining room combination in one of the small apartments. 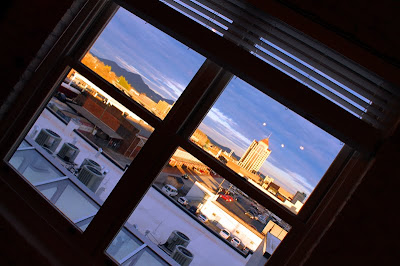 View from a fourth floor apartment. 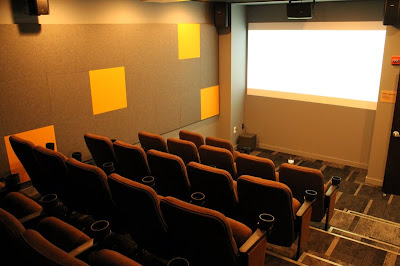 Three movies a week in the ground floor screening room. 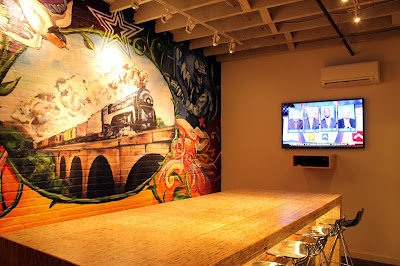 Bar on the fourth floor. 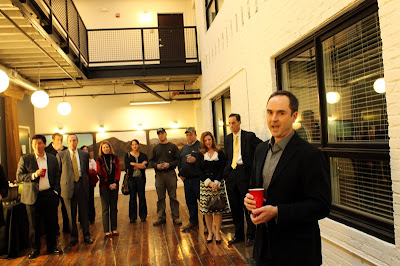 The West Station District of Roanoke continues to grow along what had been a hopelessly blighted area of Salem Avenue, mostly because developer Bill Chapman has never been steeped in Roanoke bias, he says.
Roanokers would tell you the place is not liveable, but Chapman's developments in the area around the Virginia Museum of Transportation continue to sell out to a combination of demographics from young people to retirees.

The newest is WestPlace and the next-door Beamer 25, a restaurant carrying Virginia Tech Coach Frank Beamer's name. They sit beside the Re-Store of Habitat for Humanity. The restaurant will open in late spring or early fall, Chapman says, and is being put together by his group, Beamer and Steve Parry, a restaurateur. It will serve Virginia foods and craft beers and will have outdoor dining. The restaurant will seat 100.

The new apartment complex is 60,000 square feet on four floors and has 71 apartments (1 and 2 bedroom) ranging in price from $500 to $1,050 per month. The size of the apartments ranges between 420 and 1,000 square feet. Agent Melissa Morgan says there are fewer than 10 apartments remaining to be rented.

There are a variety of amenities (for which residents pay $99 a month) including a movie room with a 125 inch HD screen, a weight room, a bar and off-street parking in a city parking garage across the street. "It is safe, covered, lighted and convenient," says Chapman. "Without the parking garage, there is no apartment complex. The city did a good thing when it built that garage."

The $7.6 million investment in the complex brings to $11 million Chapman's investment in what he calls the West Station District, which includes his Fulton Lofts, opened last year.

The location next door to Habitat is perfect, says Chapman, because recycle and renew are among the concerns in rehabilitating an old building.

This kind of investment requires a lot of belief in the area, he says. "You have to be confident. This is a tremendous risk with a lot of personal liability. In a building like this, when you start working, you don't know what's behind the wall."

The downtown area, he says, is much like the old Richmond warehouse district, which locals didn't want to develop. Outsiders did, however, and created an icon of the district. Roanoke "is small, walkable and doesn't have anything out of balance," Chapman says. "The YMCA created a new center of the city and the development is surrounding that.
Posted by moreFRONT at 5:51 PM No comments:

Occupancy Down, Rentals Stable in Roanoke 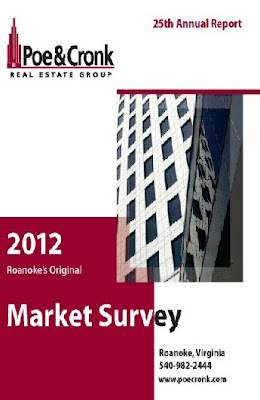 The occupancy rate in the Central Business District (CBD) decreased from 95 percent to 92 percent largely as a result of Anthem’s reduction of office space in the Franklin Plaza Building. Both the South and North Business District experienced a 2 percent decrease.

Overall occupancy rates in the valley dropped by 3 percent to 88 percent in 2011 adding an additional 130,000 SF of available office space. Roanoke’s 88 percent occupancy rate continues to outpace the 83 percent National average as reported by the National Association of Realtors.'

“Additional inventory is healthy when new construction is non-existent," says Bryan Musselwhite of Poe & Cronk. "In the past 12 months alone, we have seen a substantial increase in activity from both existing tenants looking to expand and new businesses interested in locating in the Roanoke Valley. The most recent example is Optima Health which located its regional headquarters in Downtown Roanoke at the corner of Williamson Road and Campbell Avenue." 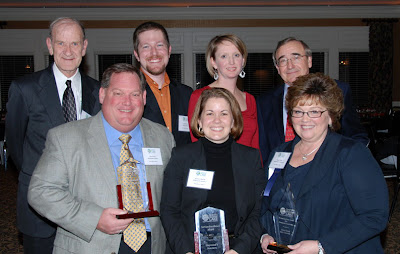 Posted by moreFRONT at 8:56 AM No comments:

300 Layoffs at ITT in Roanoke; More To Come 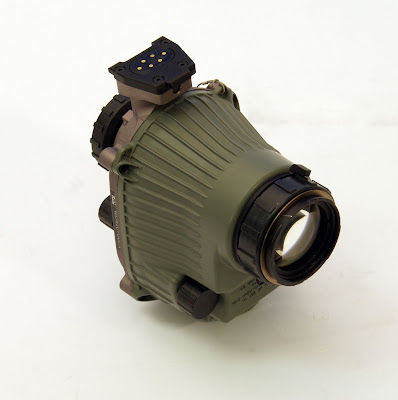 ITT Exelis in Roanoke County, a significant defense contractor with 1,400 employees in the Roanoke Valley, has furloughed 300 of its hourly employees.

ITT makes night vision goggles, mostly supplying the military whose needs are declining with the wind-down of wars in Iraq and Afghanistan.

Apparently, more cuts were on the way before the end of January.
Posted by moreFRONT at 10:58 AM No comments: 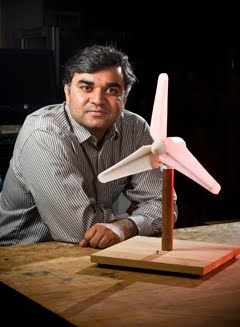 Summit leader Shashank Priya (right) says the meeting will pave the way for partnerships that could spur high-paying jobs in the burgeoning energy harvesting sector. “We anticipate this meeting to play a vital role in bringing together small and large businesses towards development of energy generation and distribution technologies,” says Priya, associate professor of mechanical engineering and materials science and engineering.

“Energy harvesting is growing rapidly across the world, covering vital sectors of the economy such as defense, health care, infrastructure, construction, mining, and consumer electronics. Commercial transitions from laboratory to market are continuously happening, and in past few years many new companies have been formed to capture this growing industry.”

Priya said the summit will be led by Virginia Tech’s Center for Energy Harvesting Materials and Systems, which Priya directs, and could help the commonwealth form a leadership role in development of the U.S. energy harvesting market. “Virginia is uniquely positioned to be a dominant player in this market, creating new economy and high-paying jobs here,” he says. “The research conducted at our Center for Energy Harvesting Materials and Systems, and its partnering industries, is continuously paving the way for new opportunities.” Registration deadline is Jan. 20.
Posted by moreFRONT at 7:57 AM No comments: 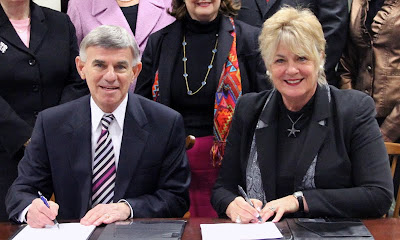 The agreement, signed during a ceremony at Ferrum College, guarantees that Ferrum will accept Virginia Western students who successfully earn their AAS Administration of Justice degree and meet outlined criteria.

“As educators we all need to make student success and employment readiness a high priority and that can mean removing barriers to higher aspirations,” says Braaten. “Two-year colleges are doing a tremendous job in encouraging so many of their students to seek higher goals. Our objective at Ferrum is to smooth the transition for these transfer students. This collaboration with Virginia Western will help achieve that aim.”

The articulation agreement ensures that Ferrum College will transfer credit for all Virginia Western Administration of Justice courses completed successfully with a grade of “C” or above at the 100-200 level, excluding SDV College Skills Courses, even when the student has not completed the Associate Degree. Virginia Western students who successfully complete 56 hours with a grade of “C” or above will be admitted to Ferrum College with junior status.
Posted by moreFRONT at 3:59 PM No comments: 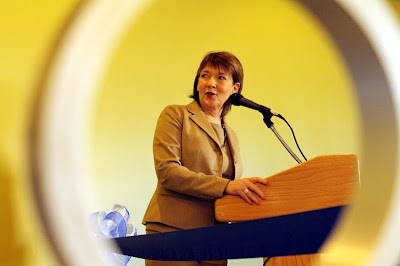 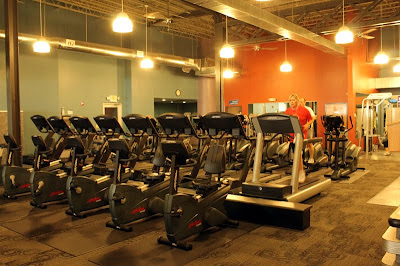 The new workout facility is ready for use. 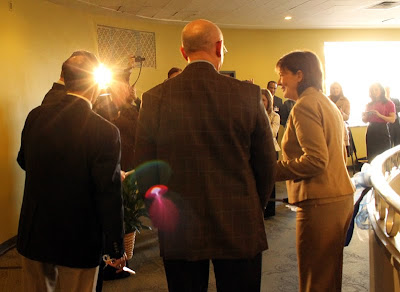 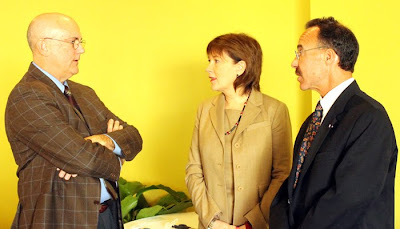 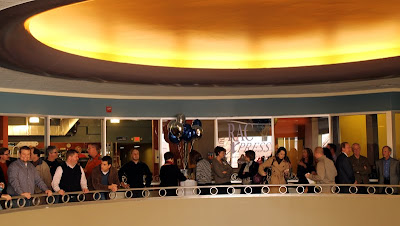 Crowd lines up along rail at the workout facility. 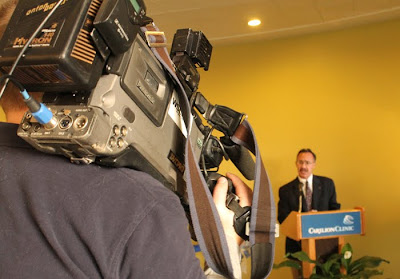 Carilion Clinic and Spectrum Design cut the ribbon for the new RAC Xpress at 16 West in downtown Roanoke early this afternoon, opening a workout facility and returning the historic building to a longtime use.

16 West was originally a cafeteria, but since 1980 it has most often been used as a facility for working out, designed around the schedules of business people. It has become an anchor for a group of businesses that will occupy the building.

Carilion executives, including CEO Nancy Agee and Bud Grey of RAC, were on hand with the project's developer, John Garland of Spectrum design. Garland has two partners in the venture.

In addition to RAC Xpress, the building's tenants will shortly include a grocery delivery service, a smoothie bar, a cheese shop and a chiropractor.

RAC is operating its facility and memberships are $25 a month.
Posted by moreFRONT at 2:27 PM No comments: 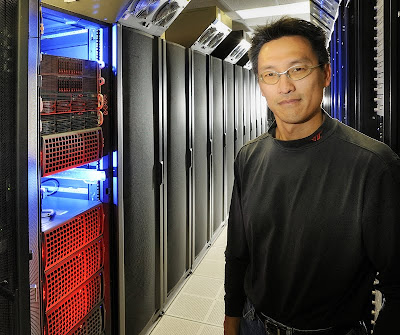 That’s enough computational capability to place HokieSpeed at No. 96 on the most recent Top500 List, the industry-standard ranking of the world’s 500 fastest supercomputers. More intriguing is HokieSpeed’s energy efficiency, which ranks it at No. 11 in the world on the November 2011 Green500 List, a compilation of supercomputers that excel at using less energy to do more. On the Green500 List, HokieSpeed is the highest-ranked commodity supercomputer in the United States.

Located at Virginia Tech’s Corporate Research Center, HokieSpeed – the word “Hokie” originating from an old Virginia Tech sports cheer – contains 209 nodes, or separate computers, connected to one another in and across large metal racks, each roughly 6.5 feet tall, to create a single supercomputer that occupies half a row of racks in a vast university computer machine room. X took three times the rack space.

“This instrument will empower faculty, students, and staff across disciplines to tackle problems previously viewed as intractable or that required heroic efforts and signiﬁcant domain-speciﬁc expertise to solve.”
Posted by moreFRONT at 8:01 AM No comments: