My long time friend, Dan Smith, editor of Valley Business FRONT, made some inaccurate statements recently about the Chamber’s relationship with [a new] business magazine. Please allow me to clarify.

Dan said that the Chamber contracted with [the magazine] to publish a quarterly Chamber magazine. We did not. We did have preliminary discussions with [the magazine] about publishing our magazine. It wasn’t interested. Prior to making any final decision, we would have put it out for bid. For now, we are not moving forward with that publication.

In our discussions, we learned that [the magazine] has been looking to publish a magazine in the Roanoke region for a number of years, having discussed the idea with many business people as recently as last fall. It has decided to move forward with a monthly publication. It is not a Chamber publication. The Chamber offered the Roanoke staff of [the publication] use of a desk, of which its local writer has not taken advantage. Perhaps this was too generous a gesture causing a misunderstanding of our relationship. The motive behind the gesture, however, is core to the mission of the Chamber, which is to promote business success throughout our region.

Competition is good for business, yet it is not the Chamber’s place to take sides with one business over another. In fact our own publication, published by a local business, saw a drastic loss of ad revenue when Valley Business FRONT began. That’s free competition. The decision by the magazine to launch its publication was not up to the Chamber. When we learned that it was going forward, out of courtesy, we fully intended to reach out to the leaders at Valley Business FRONT and other are publications to let them know about [the magazine’s] decision. Unfortunately, we did not get to have the actual advance conversation with Valley Business FRONT.

The editor and publisher of Valley Business FRONT provide a quality magazine that is well-liked and is expected to continue to be enjoyed in the region. From the Chamber’s perspective, the new business venture was not an implication that current publications were not filling strong niches. Indeed they are.

(Editor’s note: In Smith’s commentary May 6 on www.fromtheeditr.blogspot.com, he did not say that the chamber “contracted to publish a quarterly chamber magazine.” He said that it had “entered into an alliance with Virginia Business magazine.” Smith insists that is correct. A FRONT blog post that same day at www.morefront.blogspot.com, said “the Roanoke Regional Chamber of Commerce has entered into a contract with Hampton/Richmond-based Virginia Business magazine to produce a business publication in the Roanoke and New River Valleys.” FRONT continues to see this as an alliance, though its depiction as a contractual arrangement was a misunderstanding following a conversation with Joyce Waugh, which we regret.)
Posted by moreFRONT at 12:10 PM No comments:

The transition of 100-year-old MB Contractors in Roanoke is complete. The transition began six years ago as President Todd Morgan and Executive Vice President Mike Cagle acquired the remaining shares from CEO Jed Hammer on July 17.

Employees, clients, and business partners will see no change in day-to-day operations and dealings. “When Morgan and Cagle bought into the company in 2006,” says Hammer, “I began to slowly remove myself from daily operations as they took on more and more responsibility and have effectively been running the company for the past few years with me acting in more of a consulting role.”

An avid outdoorsman, Hammer plans to spend more time hunting and also with his family that includes a granddaughter and two new grandchildren who are expected before the end of the year.

Asked about their future vision for the company Morgan said, “This is an exciting time for everyone at MB Contractors as we are putting the finishing touches on 100 years in business and starting the foundation work for the next 100.

Cagle reiterated that statement saying, “I am looking forward to working to continue the growth of MB Contractors and to build on our long history of providing excellence in construction for our clients and a great work environment for our employees.”
Posted by moreFRONT at 8:14 PM No comments:

Huge Roanoke Contract Goes to Another Outside Firm

Yet another huge construction contract for work in Roanoke has gone to an outside firm, this time one in Pennsylvania with an office near Richmond. A $20.4 million contract to improve the I581-U.S. 220 link at Elm Avenue in downtown Roanoke has been won by American Infrastructure-Va. Inc. in Glen Allen.

The work is to improve the flow of traffic in one of Roanoke's more congested areas. American Infrastructure is based in Worcester, Pa. The project is expected to begin in the middle of next year and finished in 2015. A lane will be added to the off-ramps and the left turn lanes will be extended in each direction. Elm Ave.'s bridge will also be widened.

Posted by moreFRONT at 5:28 PM No comments:

Valley Ventures, which is capitalized with $15 million ($5 million from each of its partners), is being underwritten by Carilion Clinic, the Virginia Tech Foundation and Third Security, an investment firm that concentrates in this region.

The new organization's money will be available for early-stage, growing companies that show considerable promise. Ray Smoot of the Tech Foundation said the funds are not focused on any specific type of business.
Posted by moreFRONT at 7:46 PM No comments: 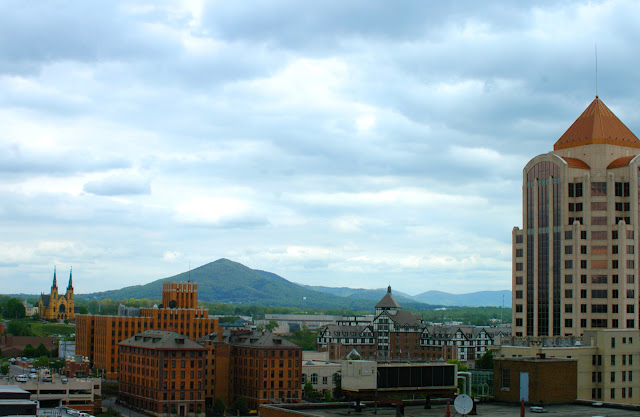 The city's entry was the "Star City Reads" campaign, a plan to ensure that more Roanoke children are reading at grade level by the end of third grade. Roanoke's plan makes the city a charter member in the Campaign for Grade-Level Reading Community Network, a national movement of local leaders, nonprofits and foundations putting a stake in the ground on third-grade reading. As a charter member, Roanoke will have access to a Promising Practices Clearinghouse, an online help desk, peer-learning opportunities, meetings with national experts and policymakers, and a foundation registry designed to expand and replicate successful programs.

"It is an honor for Roanoke to be selected as an All-America City Award winner for its ‘Star City Reads' campaign," says Roanoke Mayor David Bowers.  "We are confident this initiative will be an effective
tool for us to ensure that more Roanoke children are reading at grade level by the end of third grade.  Special thanks go to our partners-Roanoke City Public Schools, United Way of Roanoke Valley,
Smart Beginnings of Greater Roanoke, Total Action against Poverty, Roanoke Public Libraries, Blue Ridge Literacy, and Dr. Craig Ramey and Dr. Sharon Ramey from the Virginia Tech Carilion Research
Institute-for their contribution to the development of this campaign. In Roanoke, we affirm that ‘reading is everybody's business.' This is because reading lets our children become ‘STARS' in their own right -
capable lifelong learners with open minds and hearts, and the skills to succeed in school and life."

Roanoke was one of 32 finalists selected through a peer review process from a field of more than 100 entries across the country selected. In all, the National Civic League named 14 communities All-America Cities for 2012:
Each of the recognized communities submitted a "Community Solutions Action Plan" that included a broad cross-section of local partners,  including schools, foundations, community service organizations,
businesses and faith groups detailing how they would address school readiness, attendance and summer learning.
Posted by moreFRONT at 12:44 PM No comments: