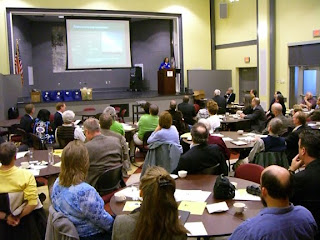 Diana Christopulos (on stage) talks of the environmental progress being made in the Roanoke Valley at this a.m.'s Cool Cities meeting. 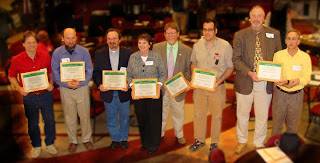 Roanoke-based Cool Cities Coalition named winners of its environmental awards for 2010 this morning during its annual meeting and among them was Valley Business FRONT Editor Dan Smith. Smith was selected for the media award partly because he “believes there is no separation between green business and traditional business,” according to the citation.

Smith was cited for his commitment to environmental responsibility in the business community, throughout his editorial career including his earlier affiliation with the Blue Ridge Business Journal and his current work with Valley Business Front. Smith will be inducted into the Virginia Communications Hall of Fame Thursday in Richmond.

The Cool Cities Coalition awards are presented to individuals, businesses and government agencies whose efforts have contributed to the overall reduction in greenhouse gas emissions in the Roanoke Valley.

The other finalists and winners are:

Billy Weitzenfeld, Executive Director, Association of Energy Conservation Professionals, was recognized as the driving force behind the Green Living and Energy Expo, which over the past ten years has become one of the premier energy conservation events in the country, drawing thousands of citizens and business people to learn and exchange ideas about energy efficiency and conservation.

Winner - Structures Design/Build, Adam Cohen, owner. Structures was cited for its contribution to and work on the Center for Energy Efficient Design, currently under construction at the Gereau Center for Applied Technology and Career Exploration in Franklin County; also for its innovative offering of the Passive House low- or no-energy building design, and for owner Adam Cohen's community involvement. Other finalists: Retellus, Rutherfoord, and Boxley Materials.

Moore was cited for her involvement and support of the work of Roanoke County to measure its carbon footprint, set specific reduction goals for community greenhouse gas emissions, and establish a citizens committee to further these goals through community involvement. Franklin County Schools received recognition for its commitment to the Center for Energy Efficient Design. Teachers Neil Sigmon and John Richardson have been closely involved with this project. Finalists - The City of Salem; Roanoke County Schools.

Mark E. Hanson was cited for commitment to renewable energy innovation, his initiative in forming a local chapter of the Renewable Energy and Electric Vehicle Association through which he has recruited a cadre of volunteers to provide help with DIY renewable energy systems in the community.

Sharebike (founder Ron McCorkle was cited for its effectiveness in raising awareness of bicycling as a viable element of our local transportation system, and for its involvement with other groups to stimulate, support and link together a wide range of community-based bicycle initiatives in the Roanoke Valley. Other Finalist - Roanoke Regional Chamber of Commerce.
Posted by moreFRONT at 11:20 AM