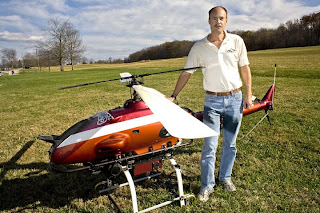 Tech's Kevin Kochersberger with the helicopter.^
Students at Virginia Tech’s Unmanned Systems Laboratory are perfecting an autonomous helicopter designed to fly into American cities blasted by a nuclear weapon or dirty bomb. The helicopter is roughly six feet long and weighs 200 pounds.

The helicopter is designed to enter an American city after a nuclear attack in order to detect radiation levels, map, and photograph damage. “It’s for a worst-case scenario,” says project leader Kevin Kochersberger, of the College of Engineering (director of the Virginia Tech Unmanned Systems Laboratory).

Kochersberger and his team of grad students re-engineered a remote-controlled Yamaha helicopter to fly in fully autonomous mode. They also created flight control software that will direct the helicopter to radioactive sources on its own accord.

To carry out various missions, the researchers outfitted the helicopter with various “plug-and-play payloads” as the vehicle’s weight capacity is limited. The payloads are boxes that fit under the helicopter’s main body, carrying devices that would detect radiation levels in the atmosphere and on the ground, and take video and still images of damage.

One payload is unique: A miniature tray-like robot on treads that can be launched via a tether wire from the helicopter to collect evidence. The helicopter would hover over the robot, and pull it back via the wire. A student team is building this robot, which will boast not only “chunk” sampling capability, but also a miniature vacuum which could suck up dust and dirt.

It is expected that the helicopter will have night vision capabilities, and enhanced imaging technologies that improve vision through smoke and fog as the project progresses.

The project, already funded at $735,000 with an additional $650,000 allocated for 2010, is overseen by the U.S. Defense Threat Reduction Agency and spearheaded by the Department of Energy’s Savannah River National Laboratory. Plans call for the helicopters to be mission-ready in three years.
Posted by moreFRONT at 9:05 AM