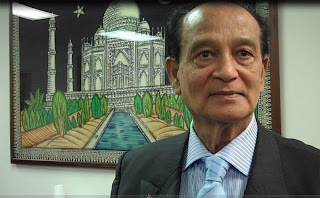 S.K. De Datta: "An international strategic plan that envisions centers in all regions of the world."
Virginia Tech has been welcoming Indian students for years and now it hopes the tables will be turned. Tech is taking a significant step toward establishing a new campus overseas through the execution of an agreement with a large private sector group.

The proposed Virginia Tech, campus will be located on at least 30 acres in the state of Tamil Nadu in southeast initially encompassing a 70,000-square-foot campus facility. Virginia Tech has a presence on five continents. The most developed centers are in and the .

Master’s and Ph.D. programs are planned for approximately 300 students in engineering and the sciences. The institution – called Virginia Tech MARG Swarnabhoomi, – fulfills Virginia Tech’s desire to have a presence in with ample land for future growth and proximity to a major metropolitan city.

The proposed campus will be located within a two-hour drive of Chennai (formerly known as ), ’s fourth largest city and the capital of Tamil Nadu. “This is a historic moment for Virginia Tech,” President Charles W. Steger says. “Virginia Tech, will create a place in where engineers, students, and high tech science professionals from the and will work together and learn from each other. Together, they will create things that none of them could do alone. Equally important, I envision this campus as a springboard to further partnerships with the private sector as well as research institutes throughout and south .”

“[Virginia Tech], contributes to Virginia Tech’s becoming a truly global university,” says S.K. De Datta, associate vice president for international affairs. “We are committed to an international strategic plan that envisions centers in all regions of the world. We believe this strategy is vital to educating our students, preparing them for the global job market, and enriching our faculty.”

The agreement represents more than three years of research and preparation on the part of a high-level team involving Steger, representatives of several of Virginia Tech’s academic colleges, and John E. Dooley, vice president for Outreach and International Affairs. The enterprise is expected to draw on Virginia Tech research resources such as the Institute for Critical Technology and Applied Science and the Virginia Tech Transportation Institute. The Virginia Bioinformatics Institute at Virginia Tech also will be involved.

“Learning, discovery and engagement – the three pillars of scholarship at the campus – will be in force at [Virginia Tech], ,” Dooley said. “Graduates with master’s and Ph.D. degrees from [Virginia Tech] will help fulfill the country’s need for quality faculty members to teach in ever-expanding engineering and science colleges in .” Virginia Tech will manage the campus and design its academic programs, research facilities, and labs. The university will also promote the idea of education abroad at the new campus and arrange for faculty exchanges.

The new campus is expected to become the site of high tech seminars, workshops, and symposia. On Tuesday, De Datta and Dooley are scheduled to accompany MARG Limited representatives including G.R.K. Reddy, MARG Limited’s chairman and managing director, to to tour the Institute for Advanced Learning and Research as a potential model for the new campus. “We want to see if they like the architecture and design,” De Datta says. “The size is about right.”

In 2007, a government commission in urged that the country increase its number of universities from 350 to 1,500 by 2015. In 1999, Virginia Tech became the first institution to offer a degree program in – a master’s in information technology offered in conjunction with the S.P. Jain Institute. Harvard, Yale, , and the Georgia Institute of Technology are also pursuing centers in .

Posted by moreFRONT at 8:25 AM