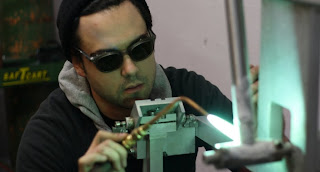 Roanoke bicycle builder Aaron Dykstra (above) has won a major national award: Best New Framebuilder at the North American Handmade Bicycle show. Dykstra operates Roanoke's Six-Eleven Bicycle Company in Grandin Village. He studied under the well-known bike builder Koichi Yamaguchi and hand cuts and miters every tube, ensuring precision in his frames. Dykstra builds frames to suit the riders buying them from a carefully selected combination of tubes and materials. The bikes come with a lifetime guarantee.

Says Dykstra on his Web site, "From a young age bicycles have been enormously important to me, much more so than other childhood playthings. I grew up hearing a romantic narrative from my grandparents about the time they spent touring Europe by bicycle after World War II. With photos, slides and a meticulous travel journal, my grandfather would paint stories of the mountainous terrain and quaint little villages they visited while touring. Though my grandparents are gone, those stories continue to motivate me."

His story continues: "In my early teens I started racing, and at 15 I got my first job in the bicycle industry in a small local bike shop in Roanoke,. I became increasingly involved with road and mountain bike racing and spent the majority of my teen years riding on the incredibly gorgeous roads and trails that Southwestern Virginia has to offer.

"At 17 I left Roanoke to join the Air Force. During my technical training in San Angelo, TX, I purchased an old Bianchi track bike and began spending what little free time I had riding the long lonely roads of western Texas. When I was finally stationed at Langley AFB in Hampton, VA, I was able to start riding and seriously training again. But that would be short lived.

"After 9-11, the Fighter Squadron I was assigned to got deployed to a forward location in support of Operation Enduring Freedom. In the midst of my long desert deployment, I began thinking seriously about framebuilding. Being around and working with fighter jets all day really motivated the mechanical side of my brain. I have such distinct memories of leaning up against an F-16 wheel and sketching out frame designs on a pad of paper. Out on the flightline under the merciless sun I realized I needed to follow my dreams in the bicycle industry as soon as my enlistment was up.

"When I got out of the military, I moved to Brooklyn, NY and eventually got a job as a mechanic at a small but incredibly busy bike shop. Commuting by bike became second nature, and the urge to race again soon followed. After a few years and a few too many close calls while riding in NYC traffic, some friends in Chicago lured me to the Midwest. I took a job working for a cycling advocacy non-profit and soon got introduced to the velodrome, where I became reacquainted with track bikes. The Chicago cycling community is truly one of the best on earth. In 2006 a bunch of friends got together and formed a race team we called Team Pegasus.

"It was an absolute blast riding, training with friends, and racing weekly at the track during the summer. Between getting married, getting back into racing, and the life long friendships forged, my time spent in Chicago will always be some of the best times of my life. But as anyone who has endured the Chicago winters will tell you, summer always comes to an end.

"In 2008 my wife was offered a job in Roanoke and I knew it was my chance to make professional framebuilding a reality. We purchased a small house in Grandin Village and I started showing my wife all the good rides in Roanoke that I knew from my past.

"Just a week after closing on our house, I flew to Colorado where I was extremely fortunate to be able to study the art of framebuilding under master Japanese builder Koichi Yamaguchi. The minute I picked up the torch, I knew I had made the right decision. I spent the following year honing my skills with the torch, holed up in our small basement with two tanks and a whole lot of steel tubing. And thus, Six-Eleven Bicycle Co. was born."
Posted by moreFRONT at 7:06 PM