Boxley Hotel Plans Proceeding; Will Not Be Razed 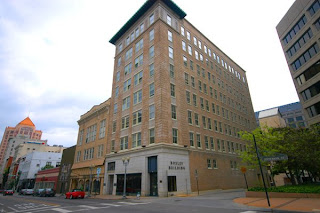 By DAN SMITH
The red-hot rumor of the moment—that the venerable Boxley Building on South Jefferson Street in Roanoke will be torn down to make room for a modern hotel—is absolute fabrication from whole cloth, according to one of the developers.

Robert Arigo, who is helping to plan the future of the building, sold recently to Roanoker Worth Boone and others, says the rumor is far from being true. “The Boxley Building is one of the most significant buildings on the Roanoke landscape and keeping its historic value is absolute with us. There are no plans to tear it down.”

Quite the contrary. Though Arigo says details of future plans will not be ready until late August, there are plans that include “a boutique hotel and residential project,” the hotel occupying the first five or so floors and condominiums on the upper floors.

Arigo calls the Boxley “one of the best-built buildings I’ve ever seen. You simply couldn’t tear it down.” The Boxley was built 87 years ago and has 39,000 square. Boone’s Fairlawn at Jefferson LLC purchased the building some months ago for $1.7 million. Boone, who is out of town and did not return a phone call, was the developer of the updated Davidson’s building next door.
Posted by moreFRONT at 2:47 PM