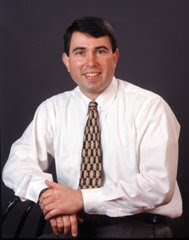 Dr. Mark Greenawald has been named founding chairman of the Department of Family Medicine at the Virginia Tech Carilion School of Medicine and Research Institute (VTC).

Greenawald, who holds the rank of associate professor, will also serve as associate chairman for undergraduate medical education within Carilion Clinic's Department of Primary Care and Regional Medicine.

>"Mark is a physician thought leader of the caliber we expect to graduate from VTC," said Cynda Ann Johnson, president and dean of the Virginia Tech Carilion School of Medicine. "His mentorship through the American Academy of Family Physicians Chief Resident Leadership Development Program to residency directors is at the front-line in teaching the next generation of physicians and is critical to keeping the practice of family medicine vital."

A graduate of Bucknell University and the University of Virginia School of Medicine, Greenawald served five years as a naval medical officer before he joined Carilion in 1995. He serves as the education director for the Carilion Clinic Family Medicine Residency and is president of the Blue Ridge Academy of Family Physicians. This year he was named the family medicine residency inpatient attending of the year.
Posted by moreFRONT at 1:55 PM