Yokohama's Environmental Tires Made From Oranges 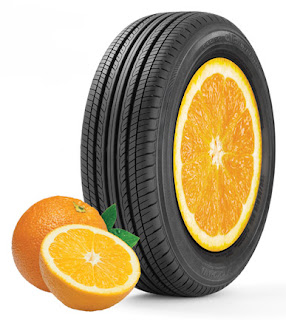 Yokohama Tire won a Clean Valley Council environmental award yesterday for planting trees—thousands of them—at its Salem facility, but little note was made of its fascinating new green efforts with its new “orange tires.”

The company has this to say about those tires:

Ever since vulcanized rubber was invented in 1844, tires have been manufactured using mostly petroleum. With the introduction of the all-new Yokohama dB Super E-spec—the world's first orange oil-infused passenger car tire, which is composed of 80 percent non-petroleum based materials—Yokohama Tire Corporation has effectively re-invented the tire.

"The eco-focused dB Super E-spec mixes sustainable orange oil and natural rubber to drastically cut the use of petroleum, without compromising performance," says Dan King, Yokohama vice president of sales. "It also helps consumers save money at the gas pump by improving fuel efficiency via a 20-percent reduction in rolling resistance. With these innovations, the dB Super E-spec could very well be the most technologically-advanced tire ever produced."

Adds Mark Chung, director, corporate strategy and planning, "The dB Super E-spec and orange oil technology fit match our overall company mandate to produce world-class products while protecting the environment. Every gallon of gas saved by the tire means 20 fewer pounds of CO2 released into the atmosphere, and because the dB Super E-spec is made from natural elements, most of its material is derived from renewable resources. No other tire on the market comes close to offering these environmental benefits along with superior performance."

"The idea of combining oil from orange peels with natural rubber was originally conceived by our racing engineers," says Chung. "The same orange oil technology, which improves a tire's grip, can be seen today with our racing tire on Porsche GT3 Cup cars. The ENV-R1 (the official spec tire of the Patron GT3 Challenge by Yokohama is the first environmentally-sensitive race tire used in a motorsports series."

The dB Super E-spec, which won Popular Mechanics Editor's Choice Award at the 2008 SEMA trade show, will initially be available in four sizes which fit popular hybrids. Yokohama Tire Corporation is the North American manufacturing and marketing arm of Tokyo, Japan-based The Yokohama Rubber Co., Ltd., a global producer and distributor of premium tires since 1917. It has a network of more than 4,500 points of sale in the U.S.
Posted by moreFRONT at 7:35 AM