These old engines have sat patiently for 60 years ... 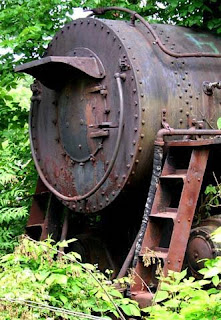 ... awaiting rescue, and now a consortium of rescuers ... 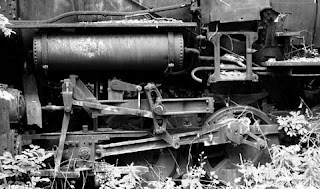 The Virginia Museum of Transportation in Roanoke has entered into a partnership that will lead to the preservation of several steam locomotives and other rolling stock that have been sitting idle for nearly 60 years near the Roanoke City Mills.

Originally faced with a cost of $50,000 per piece to remove the rail stock, the partnership provides an arrangement to save not only the steam locomotives, but virtually all but one of the pieces of rail equipment now impounded at the old Virginia Scrap Iron & Metal Co. yard in Roanoke.

“The Museum has been working to rescue these locomotives for nearly 30 years,” says Eugene M. Elliott Jr., a long-time board member of the museum. “We are grateful to our partners and the community that will allow us to bring these engines home, and save them for generations to come. Most of these pieces have a direct connection to Roanoke, and illustrate a story that should not be lost of the Valley’s hard-working railroad employees.”

“Lost Engines of Roanoke” and other rail stock have been at the scrap yard since the 1950s. The yard was recently sold to make way for Carilion Clinic’s growing medical campus on South Jefferson Street, providing a window of opportunity to save these engines.

The following are all playing an important role in saving the engines:
Groundbreaking is scheduled for later this month. Will Harris of North Fork Lumber Co., will move the equipment.

“We are excited to be taking action on the Lost Engines and to be able to put together such a wonderful coalition of partners to make it happen,” says Beverly T. Fitzpatrick Jr., the museum’s executive director. “The Lost Engines will be saved, but it will take additional funding and support from the community to restore these pieces and put them on display.”

All of the equipment is expected to be moved by September 30, 2009.

The Lost Engines include:

The steam locomotives in the Roanoke scrap yard are the very last surviving examples of two classes of Norfolk & Western heavy freight locomotives, the M2 and M2c classes. The Classes serve as an important example in the development of heavy freight locomotive technology in the pre-World War I era. Originally intended for heavy freight service, the Class M2s were soon displaced by larger engines and reassigned to local freight and switching duties. By 1950, they were among the oldest engines on the N&W roster and were designated as surplus to operations. All were sold for scrap, the last ones in 1957.

This M2c engine was built in Roanoke by the N&W in June of 1911, one of 11 built to the Norfolk & Western’s own M2 design. It included a number of advancements for its time, including the Baker valve gear and mechanical stokers. The locomotive’s Baker valve gear which gives it a signature ‘Roanoke’ look: the N&W used the Baker more than any other valve arrangement and was still using it on the last steam engine built in the East End Shops 41 years later. The #1151 arrived at the Roanoke scrap yard in 1950 and is the last survivor of its class.

Norfolk & Western Class M2 steam locomotives to the Railroad Museum of Virginia and # 1118 to Will Harris/North Fork Lumber Co.

Fifty Class M2 engines were built by the Baldwin Locomotive Works in Philadelphia in 1910. Engine #1118 was delivered to the Norfolk & Western in September of that year, and fellow survivor #1134 arrived in October. Both were sent to the Roanoke scrap yard in 1950 after forty years of service. Today, engines #1118 and #1134 are the last of the original M2s that still survive.

Two Baldwin diesel locomotives: one to the Virginia Museum of Transportation

Two “first generation” diesel locomotives are in the scrap yard. Built by Baldwin in Eddystone, Pa., in 1946, these diesels represent an historic step in the development of the technology that displaced steam from America's railroads in the 1940s and 1950s. These two locomotives are the Chesapeake Western #662 and #663, 660 horsepower locomotives which transitioned the Chesapeake Western from steam to diesel. The surviving Chesapeake Western blue paint with gold stripes is striking. The shortline railroad ran from the Norfolk & Western connection at Elkton, Va. to Harrisonburg, Bridgewater and Staunton, giving these engines an important Virginia connection. The engine in the best condition will go to the Virginia Museum of Transportation. The other will provide parts or be scrapped to defray expenses

Two Norfolk & Western steam locomotive tenders, one to the Virginia Museum of Transportation, one to the Railroad Museum of Virginia

While not the tenders originally associated with the steam locomotives in the scrap yard, two other tenders, similar in design but modified to serve as water canteens, are there. The first tender is N&W 150006, a fifteen thousand gallon tender. Its Pilcher trucks were designed by a N&W employee in Roanoke, fabricated at the East End Shops, and are rare. No car number is visible on the second tender, which is a sixteen thousand gallon tender.

Built in 1916, flat car 516605 was first used in revenue service, then placed in maintenance of way service, and later sold to the Chesapeake Western. The car may be the last class FE flat car remaining.
Posted by moreFRONT at 2:24 PM