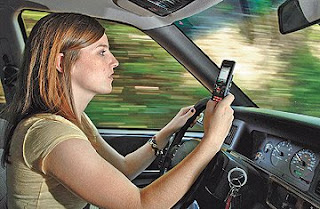 Texting while driving was found to be 23 times more dangerous than not being distracted^
Several large-scale, naturalistic driving studies conducted by the Virginia Tech Transportation Institute (VTTI), provide a clear picture of driver distraction and cell phone use under real-world driving conditions. Among the findings is the first that text messaging is up to 23 times more likely to cause a crash or "near crash event" as "non-distracted driving." The studies employed sophisticated cameras and instrumentation in participants’ personal vehicles.

Combined, these studies continuously observed drivers for more than 6 million miles of driving. “Given recent catastrophic crash events and disturbing trends, there is an alarming amount of misinformation and confusion regarding cell phone and texting use while behind the wheel of a vehicle,” says Dr. Tom Dingus, director of the Virginia Tech Transportation Institute. “The findings from our research at VTTI can help begin to clear up these misconceptions as it is based on real-world driving data. We conduct transportation safety research in an effort to equip the public with information that can save lives.”

In VTTI’s studies that included light vehicle drivers and truck drivers, manual manipulation of phones such as dialing and texting of the cell phone lead to a substantial increase in the risk of being involved in a safety-critical event (e.g., crash or near crash). However, talking or listening increased risk much less for light vehicles and not at all for trucks.

Text messaging on a cell phone was associated with the highest risk of all cell phone related tasks. Eye glance analyses were conducted to assess where drivers were looking while involved in a safety-critical event and performing cell phone tasks.

The tasks that draw the driver’s eyes away from the forward roadway were those with the highest risk. Several recent high visibility trucking and transit crashes have been directly linked to texting from a cell phone.

VTTI’s research showed that text messaging, which had the highest risk of over 20 times worse than driving while not using a phone, also had the longest duration of eyes off road time. The duration equates to a driver traveling the length of a football field at 55 mph without looking at the roadway.

Talking/listening to a cell phone allowed drivers to maintain eyes on the road and were not associated with an increased safety risk to nearly the same degree. Recent results from other researchers using driving simulators suggest that talking and listening is as dangerous as visually distracting cell phone tasks.

The results from VTTI’s naturalistic driving studies clearly indicate that this is not the case. For example, talking and listening to a cell phone is not nearly as risky as driving while drunk at the legal limit of alcohol. Recent comparisons made in the literature greatly exaggerate the cell phone risk relative to the very serious effects of alcohol use, which increases the risk of a fatal crash approximately seven times that of sober driving.

Using simple fatal crash and phone use statistics, if talking on cell phones was as risky as driving while drunk, the number of fatal crashes would have increased roughly 50 percent in the last decade instead of remaining largely unchanged. These results show conclusively that a real key to significantly improving safety is keeping your eyes on the road.

In contrast, “cognitively intense” tasks (e.g., emotional conversations, “books-on-tape”, etc.) can have a measurable effect in the laboratory, but the actual driving risks are much lower in comparison.

Posted by moreFRONT at 6:08 PM